PCBs thanks to their relatively low cost have become a staple in many of my projects (I wish I had one here). It has come to the point now where some of my projects are created simply because I want to make another PCB.

Quick background for this project: I recently moved into a dorm and suddenly had a bunch of keys to things bike lock, most importantly my dorm and others…

I thought that it would be a good idea to have something on the keys so that if I lost them – theoretically – someone would find them and have a way to contact me.

So instead of buying some label I decided to make another PCB and turn it into a mini-flashlight with my information printed on the PCB silkscreen. The gold plated banana jack hole is big enough to fit your key ring through.

It measures in at .85 square inches and a lower profile battery holder would help. The 250mA CR2032 provides up to 4 hours of light.

The files are on GitHub if anyone is interested in making their own. Additionally there are some slight improvements on those files which is why they appear a little different than the PCB in the following photos.

As far as a schematic goes it is pretty simple with a CR2032 battery/case, 3x LEDs/resistors, a diode to protect against frying the thing when I put the battery in backward and an on/off pushbutton. 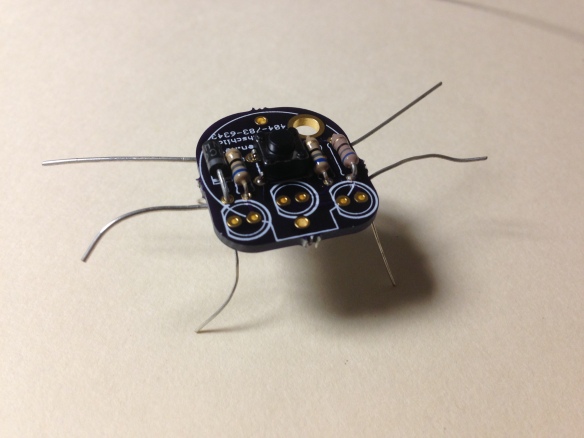 When soldering install the battery holder last otherwise you won’t be able to get to any of the other parts.

The 3x 5mm superbright red leds wreak havoc temporarily on your eyes if you look into them directly thanks to their 9,000 mcd.

The resistors are 68Ω – which is what I had on hand – really should be a little lower for maximum brightness. You could go as low 33Ω.

Stay tuned for new and more exciting things to come in the future. 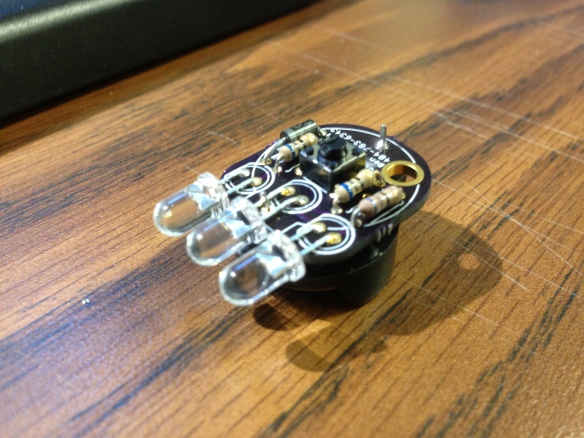